The annual Amusement Expo is an event for the arcade, music and family entertainment industry. Traditionally, this industry was known as “coin operated amusement or coin-op”. However, the days of using coins to operate the amusement games are long gone. With this transformation, industry professionals now call it “revenue-generating amusement”, however, we are still a fan of “coin-op”.

The Amusement Expo is a 3-day event. The first day begins with educational sessions followed with two full days of exhibits on a convention floor. The exhibits are the most interesting and fun part of the entire expo. Every year, over 200 manufacturers and suppliers come to the event to exhibit their latest and most popular products and services to the most important clients in the industry.

Video Amusement is committed to the coin operated industry and always attends the annual expo, including all the interesting educational sessions related to our industry. We are always on the lookout for new amusement games and trends. In return, we are able to offer new and fresh ideas to our clients.

VR or Virtual Reality games took the center stage at this year’s expo. Many manufacturers are jumping on the bandwagon and introducing new or remanufactured standard motion rides into VR motion rides with VR goggles or headsets. We personally have a mixed feeling about the VR games. While, it is a great technology and everyone should try to play or ride a VR game at least once, VR technology is still evolving and extremely expensive. Some of the VR attractions cost $100K and could be outdated in matter of couple of years.

Below are some of the highlights from this year’s Amusement Expo. Many of these interesting games will find a place in our growing roster of machines for rent. 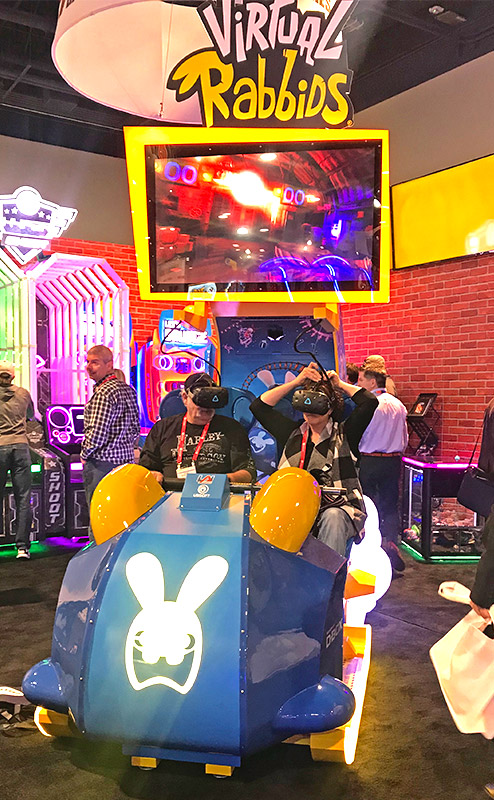 Virtual Rabbids is an interesting VR ride from LAI Games. With any VR game, in order to experience the true VR feeling, you have to wear the VR headset. 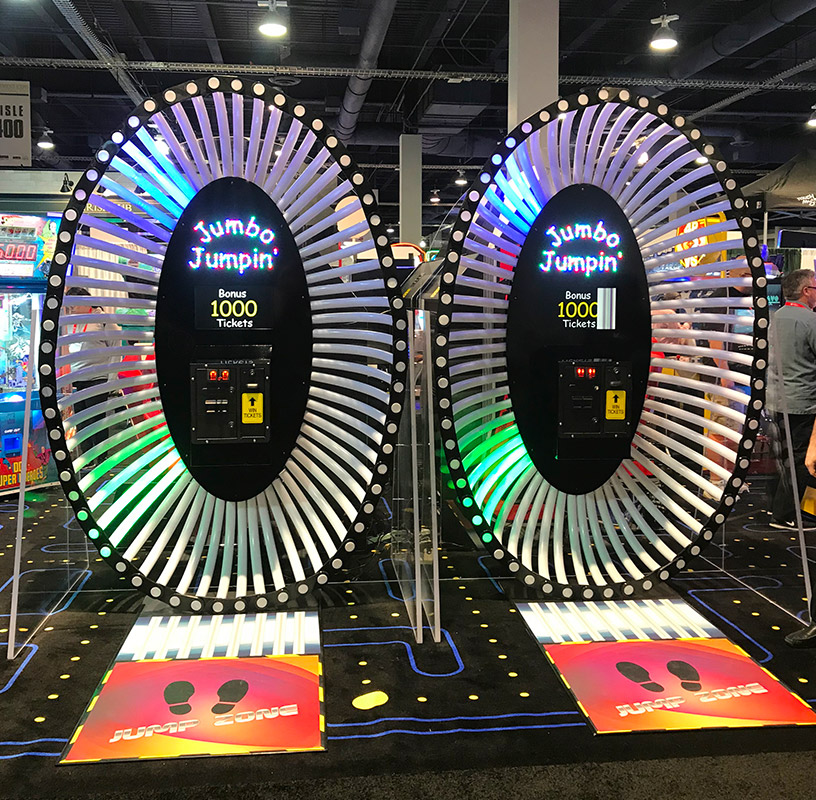 NAMCO Amusement was showing Jumbo Jumpin’. We saw the game for the first time at IAAPA 2017 in Orlando. The game is still a prototype. Expected release is not till June this year. Jumbo Jumpin’ is a certainly the game that will be joining the roster of the Sports Games for rent at Video Amusement. 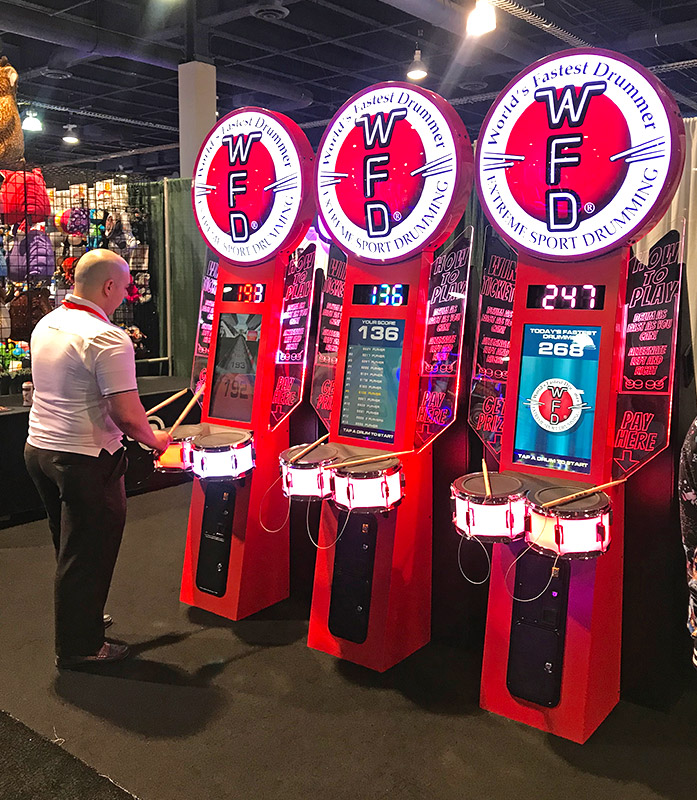 World’s Fastest Drummer is made by Unit-e Technologies. Exciting and challenging game. Playing the game, I realized I will never be a professional drummer, but I had lot of fun doing it. This is another game joining the roster of games for rent at Video Amusement. 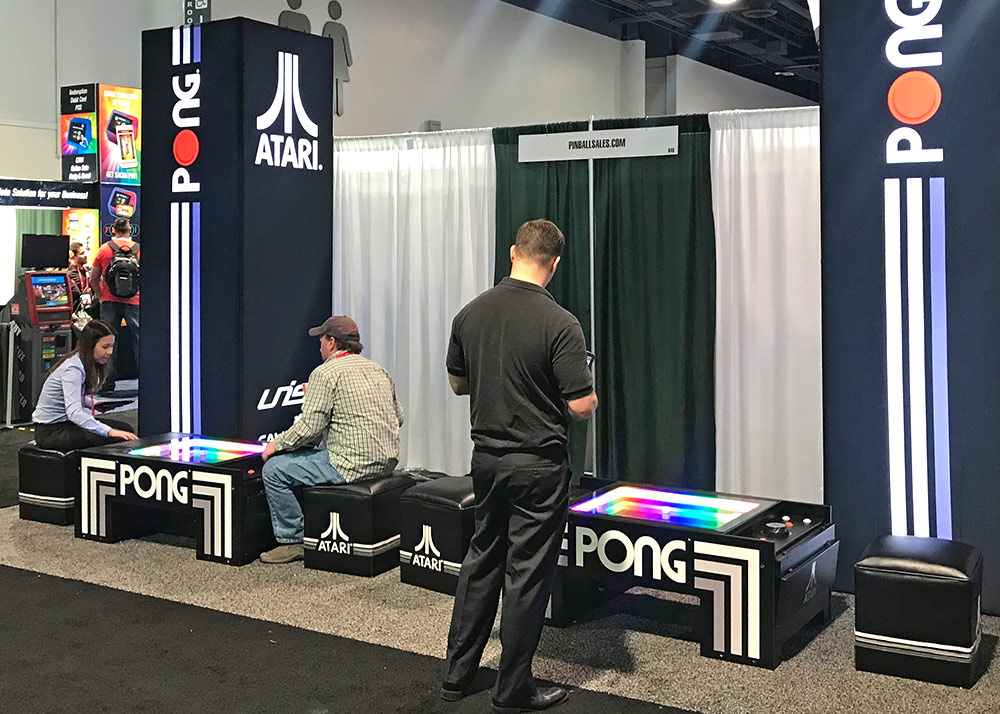 Pong game by ATARI. I played the game again and I like it even more than the first time at last year’s IAAPA. However, I do not expect to see this game in our warehouse till September. I am keeping my fingers crossed. 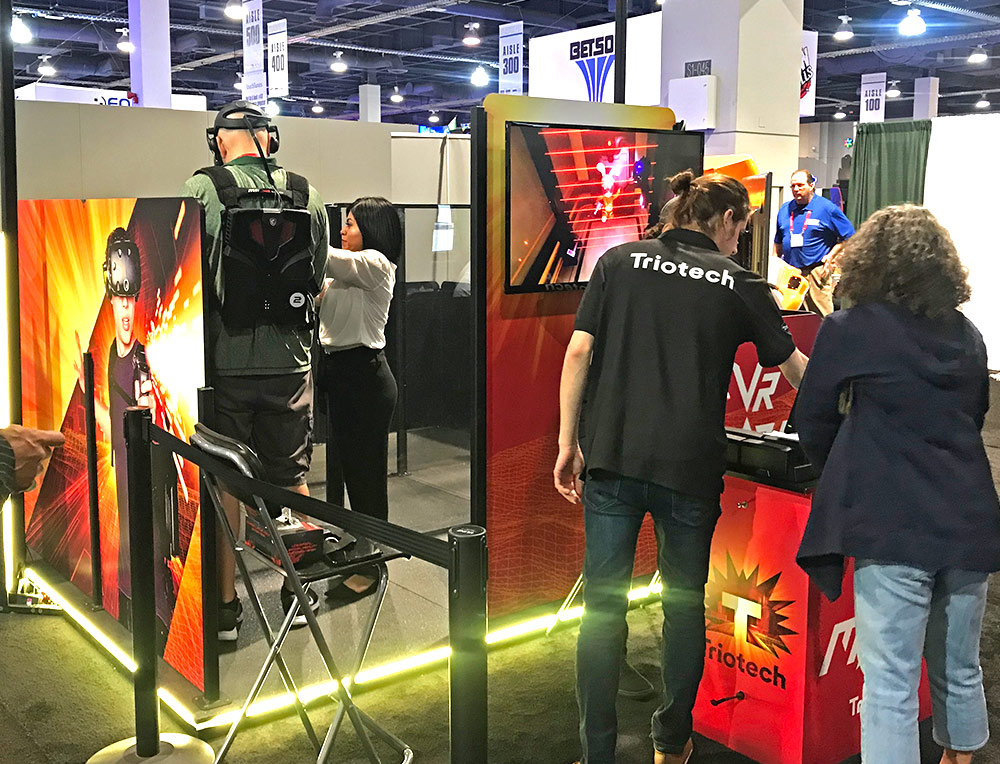 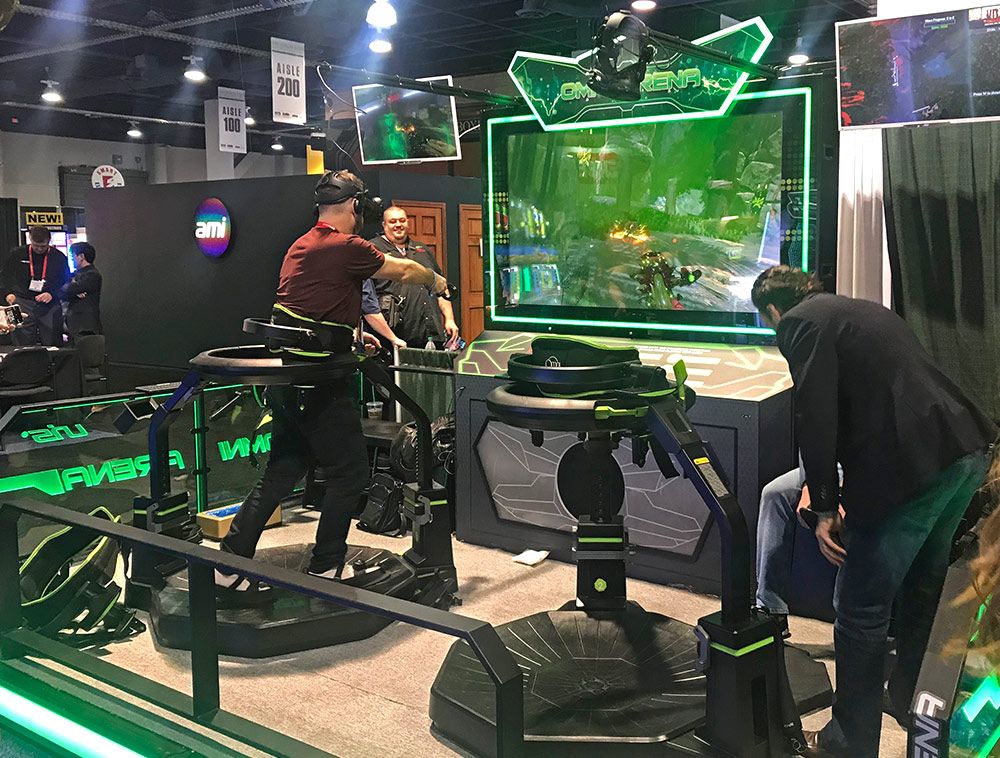 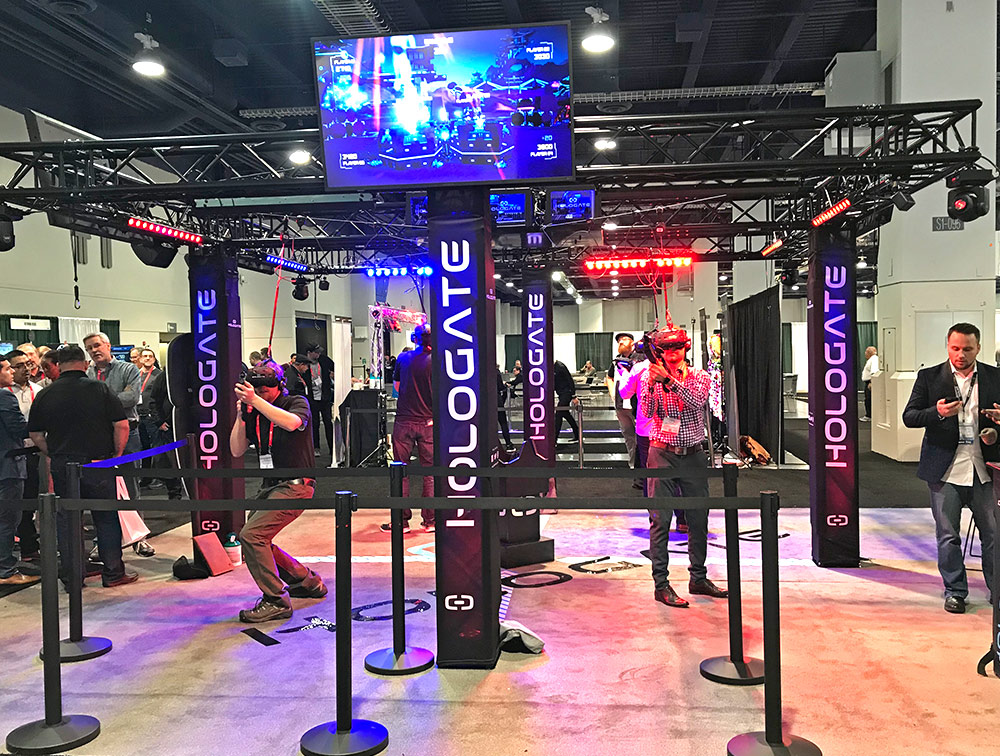 Here are a few of many VR concepts featured at this year’s Amusement Expo. Some of them with a price tag over $100K. 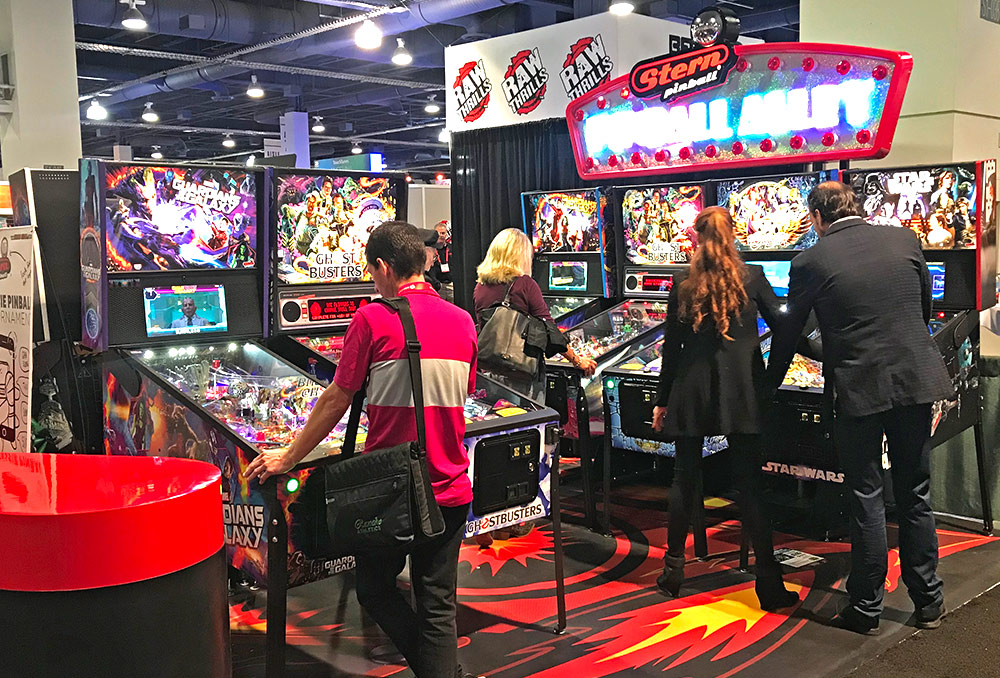 Stern Pinball with a selection of recent and current releases. We own many of the Stern’s pinball machines. They are amongst the most popular games we rent. 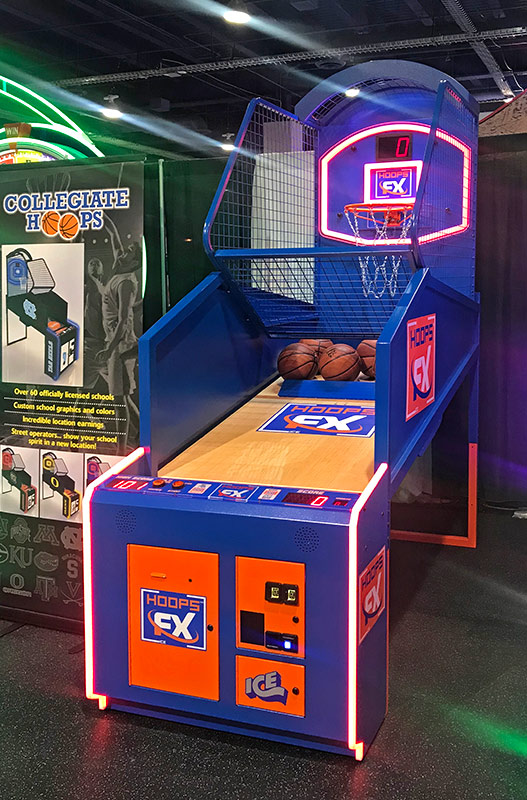 Hoops FX from ICE Games. We already own many popular sports games from ICE Games. Hoops FX is a new game with colorful changing LED lights with surprisingly a small footprint. The games can be ordered with branding of just about any NBA or college basketball team. 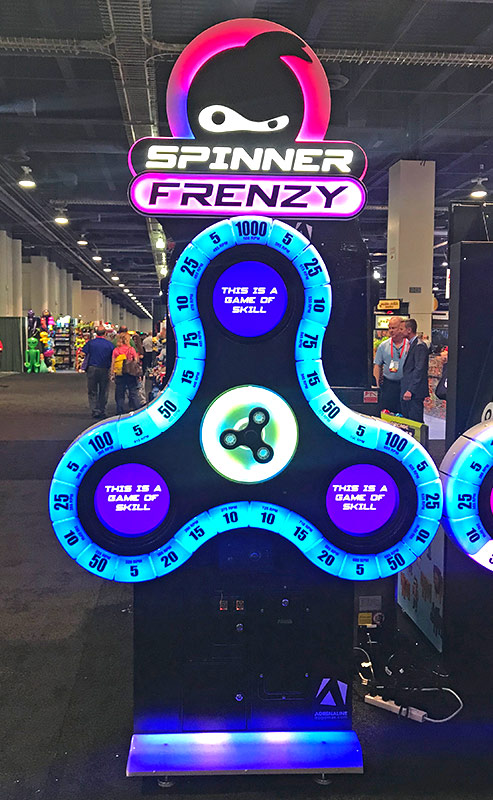 Spinner Frenzy from Adrenaline Amusements. This game was extremely fun to play! This is a ticket redemption game is a game of skill but unfortunately, we won’t see it coming to our inventory of games anytime soon. Check out the video of my actual play.