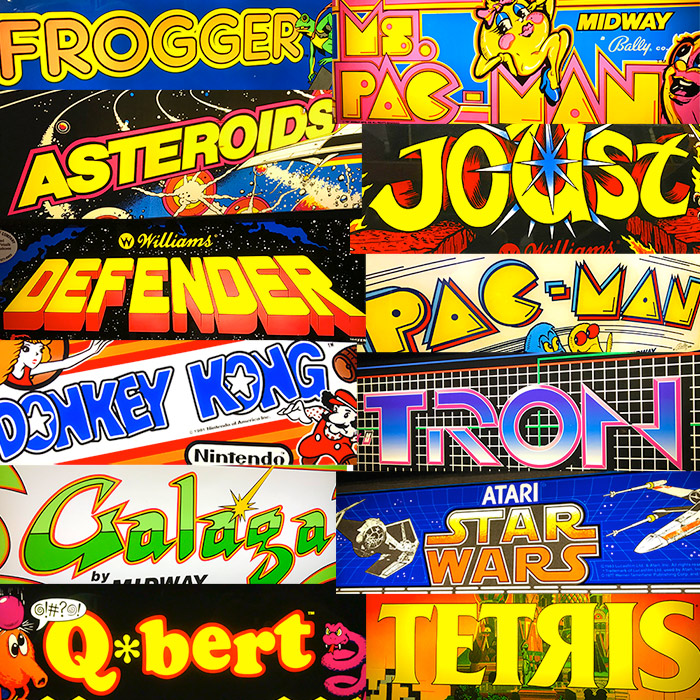 I recently had a conversation with my daughter about an 80s themed birthday party she is throwing for her friend. She was so excited about the bright colors, rubik’s cubes, 80’s smash hits and, most importantly, her 80’s themed outfit. Never once did she mention arcade games.

I was shocked. My own daughter, who grew up playing all the classic 80’s arcade games, who practically had Ms. Pac Man running through her veins like it was the maze, wasn’t even entertaining the idea of having arcade games at her party. Where did I go wrong?

But in all seriousness, this conversation got me thinking… has the golden age of arcade games been forgotten? Hopefully the answer is no, but I want to take this time to educate you on this era, and the most popular games of this time… games you should absolutely consider renting for your next 80’s themed party.

The Golden Age of Arcade Games was the era when arcade games disrupted pop culture (for the better, in my opinion) and was effectively the peak of the gaming industry. While the exact timeline is still up for debate, many agree it ranged from the late 1970’s- mid 1980’s. One of the most pivotal moments in this era was the release of Space Invaders in 1978.

These games were an integral part of pop culture in the 80s. The game which most influenced pop culture in North America was Pac Man. Released by Namco, this game caused such a sensation it is now referred to as “Pac – Mania”. Arcade games also started to be featured in films and started appearing in movie theaters across the country.

During this time, video games accounted for 87% of the $8.9 billion in commercial game sales in the US. In 1982, the gaming industry’s revenue was estimated at $8 billion – higher than the annual gross revenue for both pop music and Hollywood films.

But why were these games so popular? Experts agree there are three main reasons:

2) Characters and Storylines: the recognizable characters and storylines lines appealed to mass audiences… even finding its way into television shows, movies, etc.

3) Perfect amount of complexity: the games weren’t too easy… but weren’t too hard either. Complex enough to keep people interested, but not enough to frustrate them.

Some of the most popular game included:

Taito Manufactured by Namco and released in 1980. Considered to be one of the most popular and influential games. First game to introduce a gaming mascot and establish the maze craze. Player navigates Pac Man through a maze with various dots. Objective is to accumulate as many points as possible by eating the Pac Man dots.

Manufactured by Taito and released in 1978. Considered to be the game that revolutionized the video gaming industry. Space Invaders is one of the original shooting games and aims to defeat aliens with a laser cannon.

Manufactured by Nintendo and released in 1981. Influential in laying the foundation for what became known as the platform game genre. This game focuses on helping the main character dodge and jump over obstacles, while trying to get across of series of platforms.

Manufactured by Konami and released in 1981. Notable for being fighting and shooting free. Objective of the game is to help frogs safely find their home by crossing busy roads and rivers full of obstacles.

Manufactured by Data East and released in 1982. One of the biggest surprise hits during this time. Players must help chef Peter Pepper build hamburgers while navigating mazes and avoiding challenging characters.

Manufactured by Atari and released in 1980. One of the most commercially successful games during the era, and one of the first games to use trackball control and vertical monitor orientation. Objective is to fight of centipedes, spiders, scorpions and fleas.

Manufactured by Namco and released in 1979. Highly popular game upon release and created to compete with Space Invaders. Objective of this fixed – shooter game is to control the spaceship and shoot enemies descending from different directions.

Manufactured by Atari and released in 1979. Known as Atari’s most successful coin – operated game. Objective of the game is control the spaceship and destroy all the asteroids and saucers, while avoiding the saucer’s counter – fire.

So the next time you throw an 80’s themed party, you should consider renting some classic arcade games. Video Amusement has the largest inventory of 80s’ games in entire California. Don’t make the same mistake my daughter did 😊