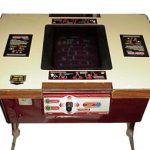 The game for rent is featuring Jump man, later to become one of gaming’s most recognizable and iconic characters. Mario is traversing a sequence of platforms, dodging and fly over obstacle unnerved into his path by a colossal ape named “Donkey Kong.” That also to become one of Nintendo’s most popular video game characters. Mario is on a mission to save a damsel in distress before time runs out.

Donkey Kong Arcade Game is one of the most famous arcade video games of all time.

Are you planning an 80s retro-themed night party or just want to add 80s nostalgia to your event? These classic arcade games will create the feel and look, and certainly bring lots of memories. Classic arcade games for a long term rent or lease are a perfect addition for any corporate break or game room. Video Amusement has the largest selection of classic arcade games in California. Featuring the classic 80s’ games and the current new releases.