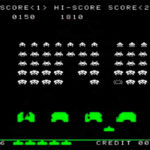 Space Invaders Arcade Game rental was one of the forerunners of the modern video game. Initially manufactured by Taito Japan and released in 1978. The game is simple and less complicated than what we see today.

The game is a fixed shooter; the player uses laser cannon to shoot the aliens as they drop from the sky.  As the aliens are continued being shot, the faster they come down, the faster the music goes. However, there is no end to the aliens in Space Invaders, which means that you are the one that has to gives up.