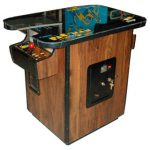 Pac-Man Arcade Game for rent is a classic video arcade game developed by Namco and licensed for distribution in the United States by Midway in 1980. Instantly becoming one of the highest-grossing and most recognizable arcade games of all time.

Gameplay consists of navigating yellow, pie-shaped titular character Pac-Man through a series of mazes and eating pellets and fruit, while avoiding four ghost enemies. Each maze has its bonus fruit, with points increasing as the game progresses. When all the pellets on a level have been consumed, Pac-Man progresses to the next level.

The game is available in two versions as an upright cabinet and a cocktail table.