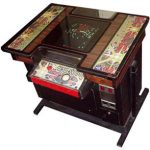 The player side-scrolls at the bottom of the playfield via a trackball, firing shots at a centipede as it advances from the top of the screen down through a field of mushrooms. They are simultaneously defending against centipedes, spiders, scorpions, and fleas as they appear.

In rented Centipede Arcade Game, hitting any segment of the centipede creates a mushroom. Running a middle section splits the centipede into two. A player loses a life when hit by a centipede or any of the other enemies. The game is over when the player’s last life is lost.

The game is available in two versions as an upright cabinet and a cocktail table.

Classic arcade games for a long term rent or lease are a perfect addition for any corporate break or game room. Video Amusement has the largest selection of classic arcade games in California. Featuring the vintage 80s’ games and the current new releases.