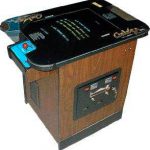 Galaga Arcade Game rental was developed by Namco and licensed for distribution in North America by Midway in 1981 as a sequel to Galaxian, released in 1979.

The objective of the Galaga Arcade Game is to score as many points as possible by destroying insect-like enemies. The player controls a side-scrolling starfighter at the bottom of the playfield. Enemies swarm in groups information near the top of the screen, and then dive-bomb players, firing upon and attempting to crash into them.

The game ends when the player’s last fighter is lost, either by colliding with an enemy, its projectiles, or by being captured. Galaga Arcade Game introduced new features over its predecessor, Galaxian, including the ability to fire more than one shot at a time and a count of the player’s “hit/miss ratio” at the end of the game.

Galaga Arcade Game is available in upright and cocktail versions.

Classic arcade games for a long term rent or lease are a perfect addition for any corporate break or game room. Video Amusement has the largest selection of classic arcade games in California. They are featuring the vintage 80s’ games and the current new releases.