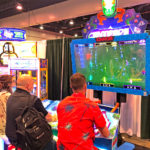 Centipede Chaos Arcade Game for rent, one of the most beloved rental classics of the 80s, is back. The legendary maker ATARI Games originally released the Centipede video game in 1981. They are becoming one of the most commercially successful games of the video game “golden age.”

After almost 38 years, Centipede is back! Above all, bigger, faster, full of energy, and the best feature of the new game, up to 3 players can compete against each other.

Centipede Chaos Arcade Game for rent takes an original play concept from the Centipede game. In addition to the imaginative gameplay, it also mixes the elements from the Millipede game. Furthermore, bringing even exciting play-action from the newly released Space Invaders Frenzy arcade game. All these elements combined make this the new game action-packed blaster! Rented gameplay is broken into waves where every wave is a little different, with different enemies every time and, of course, harder.

The cabinet is a large and impressive game that stands 10 feet tall and almost 8 feet wide! New Centipede Chaos comes with beautiful changeable LED lights and colorful 3D overhead signs. Also, 75″ HD monitor and mushroom-shaped seats with a built-in “rumble” feature. The striking presentation of this game will be an instant hit at any event or party. The game is suitable for kids and adults alike.