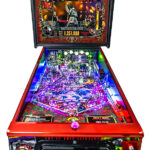 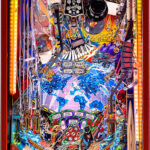 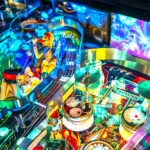 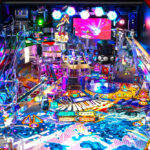 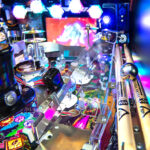 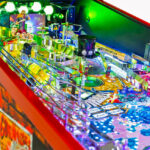 The artwork of the Guns N’ Roses Pinball Machine featured photos by Robert John from his book Guns N’ Roses: The Photographic History. Guns N’ Roses pinball machine for rent is a widebody pinball game with several unique features. Among them is an old-fashioned revolver, which players used to start the game as opposed to the typical plunger. The band’s famous “Welcome to the Jungle” song (recorded from a concert) plays when a quarter is inserted. Also included on the soundtrack is the Use Your Illusion outtake “Ain’t Going Down,” which is the only official release of the song. The backdrop is illuminated with lights in the shape of the famous Guns N’ Roses seal. Axl Rose’s tattoos are featured in the Appetite for Destruction album artwork. The multiball can be activated when the yellow light is lit on the G ramp; this will open a trap door and send the ball into the snake pit (if the ball is shot up the ramp, which is a hard shot), pulling the rose plunger will then activate the multiball. An “R” ramp was also featured, completing the “GN’R” logo.