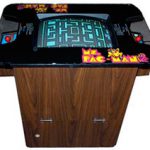 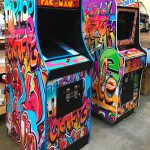 Ms. Pac Man Arcade Game rental was produced by Midway Games, the North American licensee of Pac-Man, Ms. Pac-Man was released in North America in 1982 following the popularity of 1980’s Pac-Man. The game immediately surpassed Pac-Man, becoming one of the most popular video games of all time.

Ms. Pac Man Arcade Game is nearly identical to the original Pac-Man; players earn points by eating pellets and avoiding contact with ghosts, consuming power pellets that allow the ghosts to become vulnerable to destruction for extra points. Bonus fruits are available on each level in increasing point values. As the levels progress, character speed increases, and power pellets have a shorter duration of the ghost vulnerability, eventually stopping altogether.

In a departure from Pac Man, the game has four different mazes that appear in various color schemes, and alternate after each of the game’s intermissions are seen. In contrast to Pac-Man, Ms. Pac-Man has four mazes in different color schemes, alternating after each of the game’s breaks. Three of the four mazes have two sets of warp tunnels, as opposed to only one in the first maze.

Classic arcade games for a long term rent or lease are a perfect addition for any corporate break or game room. Video Amusement has the largest selection of classic arcade games in California. We are featuring the vintage 80s’ games and the current new releases.