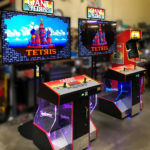 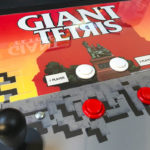 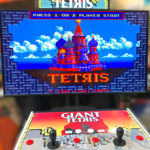 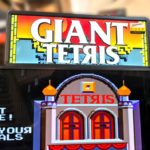 Giant Tetris Classic Arcade Game is a classic video arcade game for rent. The game was designed by a Russian Scientist (Alexey Pajitnov) in Moscow in 1984. Early versions of Tetris were released for home computers as well as arcade games. Tetris went on to become hugely successful and is regarded as the “Greatest Game of All Time.”

Tetris Arcade Games are some of the most popular games that we rent out. Our customers have been asking us: “Can we play the rented game on a large screen, and not just the 19″ or 25″ monitors”? Our creative Video Amusement team got to work and created the “Giant Tetris Classic Arcade Game. “ It is still the same game we are all familiar with, but now we can all play on a huge 65” LCD monitor. Giant Tetris Classic Arcade Game for rent is an attractive piece. With delightful color-lit sign that is guaranteed to stand out at any venue.

Tetris is a classic puzzle video game in which seven variations of tetrominoes, geometric shapes composed of four square blocks. Blocks fall in a random sequence from above as the player manipulates their arrangement. To make a horizontal line of ten tetrominoes without gaps. Completing a line causes it to disappear and the tetrominoes above to fall. Completing four rows at once is called a Tetris. When a certain number of lines are cleared, the game enters a new level, with the tetrominoes gradually picking up speed.

The Tetris arcade game ends when the tetrominoes reach the top of the playfield, and no new tetrominoes can enter.