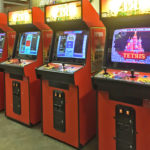 Tetris Arcade Game for rent was created in the Soviet Union by artificial intelligence researcher Alexey Pajitnov in 1984. The game was released in the United States by Atari Games in 1988.

Tetris Arcade Game is a puzzle game that will test your awareness and your decision-making skills. The rented game is a 2-player game. The player has the option to play against the computer or in a 2-player mode against the second player.

Tetris Arcade Game rental is a classic puzzle video game in which seven variations of tetrominoes. They are geometric shapes composed of four square blocks. Blocks fall in a random sequence from above. The player manipulates their arrangement to make a horizontal line of ten tetrominoes without gaps. Completing a line causes it to disappear and the tetrominoes above to fall. Completing four rows at once is called a Tetris. When a certain number of lines are cleared, the game enters a new level. At this point, the tetrominoes are gradually picking up speed. The rented Tetris Arcade Game ends when the tetrominoes reach the top of the playfield, and no new tetrominoes can enter.