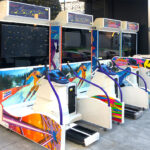 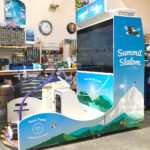 While standing on two pedals and using the bars for stability, this Namco Alpine Racer Skiing Arcade Game for rent will offer you two types of races, downhill and out of the gate that includes two play modes, time attack, and Race.

As you cross the checkpoint, you will have your time extended. Rented Alpine Racer Skiing Arcade Game has excellent visuals that encourage players to act out the maneuvers when going over a mogul. Alpine Racer Skiing Arcade Game is fun watching the players play. It is so much like the real thing that you can almost feel yourself get cold. This is a game to engulf your senses into some skiing fun.