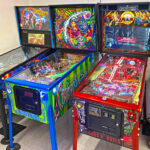 Cirqus Voltaire Pinball Machine for rent is a 1997 pinball game designed by John Popadiuk and released by Bally/Williams. The theme involves the player performing many different marvels in order to join the circus.

Some of the captivating features in the game include a neon light running along the right-hand ramp. A pop bumper rises up from the middle of the playfield at certain times. Mini-playfield at the top of the center ramp with a magnet to catch the ball for locking. The most notable feature is the Ringmaster. The head rises at certain times and makes cracks against the player.

Cirqus Voltaire Pinball Game features nine “marvels” the player must complete before they are invited to “Join the Circus.” Each string of marvels leads to one letter. When all marvels are complete, the word C-I-R-Q-U-S is spelled. The players must then shoot either the left or right orbit to try and join the cirqus. Juggler, Side Show, Ringmaster Frenzie, Menagerie, Defeated All Rigmasters, Highwire Multiball, Spin, Boom! And Acrobats.