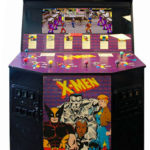 Are you ready to save the human civilization from Magneto and his minions? Six players: Cyclops, Colossus, Wolverine, Storm, Nightcrawler, and Dazzler are prepared to help you to save the world!

X-Men 4 & 6-Player Arcade Game for rent is based on the Marvel Comics characters. Konami, the legendary arcade game maker, released the game in 1992. It is a side-scrolling “beat them up” game, a trendy game style of the early 90’s era.

The objective of the game is to stop the villains from wreaking havoc on the human population. The players have to progress as far as possible and survive while fighting the X-Men comics characters. Army of hundreds of Sentinels, mutant crocodiles, Reavers and super-villains Pyro, Blob, Wendigo, Nimrod. Also, the White Queen, Juggernaut, Mystique, and finally later in the game Magneto. Almost every character in the game can fight with punches, kicks, and other combat attacks. Every aspect also has a unique mutant power to be used to defeat multiple enemies at once. X-Men Arcade Game for rent is a classic and top-rated game to play because it is simple and repetitive with unlimited continuations. Finally, get your six friends together and have a blast with the rented game.