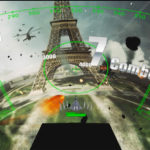 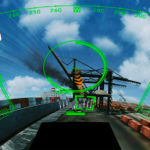 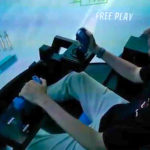 Mach Storm Air Combat Dogfighting Simulator uses specially built cabinet called POD. (Panoramic Optical Display). Player sits inside the cockpit of the fighter aircraft surrounded with seamless dome screen projection display. The 180° degree view inside the POD is anything you have seen before in any other game on the market. The view during the game play is like Virtual Reality vision. Without the use VR goggles. The players will truly feel like flying the actual fighter jet and diving head first into the intense action.

The Virtual Reality effect is enhanced furthermore with the force feedback joystick, surround sound, subwoofer under the seat for vibration and gentle airstream. Creating unforgettable “4D” player gaming experience. At the beginning of the rented game, build-in on board camera takes a picture of the player. Used for avatar and high score display.