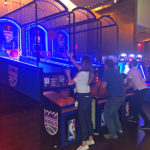 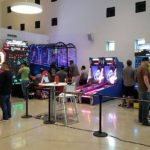 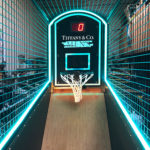 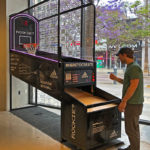 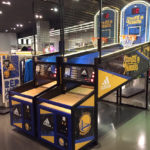 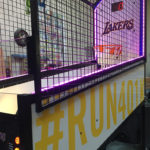 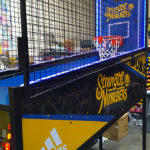 NBA Hoops LED Basketball Arcade Game is a commercial basketball game from Innovative Concepts in Entertainment (ICE Games). ICE Games is the leading manufacturer of some of the most popular and iconic games. Some of the famous titles are: Ice Ball FX, Super Chexx, Major League Baseball, NFL 2 Minute Drill, NBA Hoop Troop. Many are currently in our game portfolio. They are also favorites in arcades and game rooms in 80 countries throughout the word. Including Dave and Busters and Chuck E Cheese here in United States!

NBA Hoops LED Basketball Arcade Game game for rent is a cool and sleek. LED illuminated basketball game that will keep the guests entertained for hours. The rented game comes in “generic NBA” licensed graphics. Upon request, we will decorate rented NBA Hoops LED Basketball Arcade Games with LED lights any colors and logos of your favorite basketball team, your company logo or custom graphics to make your company stand out at any event or trade show. Multiple rented games can be linked for “Head to Head” competition.