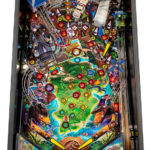 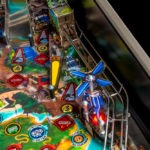 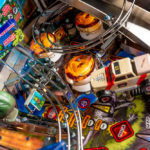 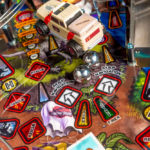 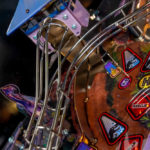 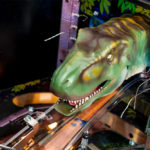 As the game starts, the player is transported to Isla Nublar, an amusement park where escaped dinosaurs are running amok!  The player’s mission is to rescue park staff and recapture dinosaurs from the chaotic environment unleashed by Dennis Nedry’s computer virus.  All dinosaurs, though, are not created equal as players will battle Raptors and the mighty T. Rex!  The game immerses players in the fun world of fighting dinosaurs in an action-packed adventure filled with twists and turns.

The game features four ramps: Two ramps in the back of the game on the left and right, one on the middle right that’s more of a vertical turnaround onto a wireform, and one on the middle left you can nail with the upper-right flipper. Three flippers, including the upper-right flipper mentioned above.  Jungle Adventure Vehicle bash toy: This has a spinning “Newton Ball,” a pinball mounted on the playfield that you can hit to spin the vehicle. This is a moving target that registers direct hits, determines the direction players navigate on the island during gameplay, and lights T. Rex modes.