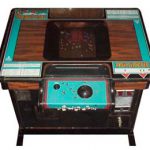 The objective in Millipede Arcade Game is similar to that of Centipede: to score as many points as possible by destroying every segment of the millipede as it advances from the top of the screen down through the field of play, while simultaneously destroying and avoiding other enemies, including new and deadlier additions in the form of bees, earwigs, inchworms, beetles, dragonflies and mosquitoes, sometimes appearing in swarms.

The game is played with a trackball and a single fire button, which can be held down for rapid-fire. A player loses a life when hit by a centipede or any of the other enemies. The game is over when the player’s last life is lost.

Classic arcade games for a long term rent or lease are a perfect addition for any corporate break or game room. Video Amusement has the largest selection of classic arcade games in California. Featuring the vintage 80s’ games and the current new releases.