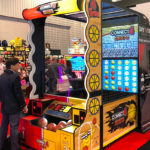 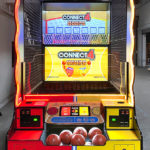 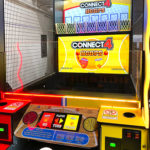 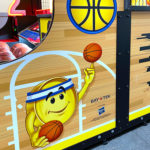 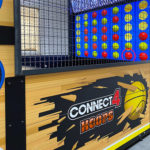 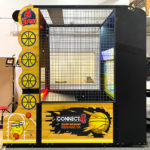 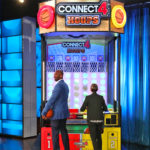 What happens when you combine a classic sports game with a classic board game?

This is exactly what engineers at BayTek Entertainment were asking. They got together, combined ideas, and created a game larger-than-life, CONNECT 4 HOOPS. The rented game is 9 feet high and 9.5 feet deep! Even though the game is massive, players aren’t as intimated as they would be playing a standard arcade basketball game.

Rented Connect 4 Hoops Arcade Game is played just like the classic Connect 4 game. The game can be played solo against the computer or with a friend, using the full-size basketballs instead of the “chips” used in the classic Connect 4 game. Side 1 is for Red, and side 2 is for Yellow. The players alternate shooting hoops and watch the balls fall into place within the LED projected grid. During the single-player game, the computer will rotate with the player and shoot the ball. In a two-player competition game, each player takes a turn to shoot the basket until it is made. The goal of the game is to match four of your colors on this enhanced projected grid – horizontally, vertically, or diagonally, just like in the classic original Connect 4 game. The player to be first to “Connect 4” wins!

Connect 4 Hoops Arcade Game is one of the most popular arcade games and can be found in all Dave & Buster’s® Restaurants, arcades, and sport centers throughout the country.