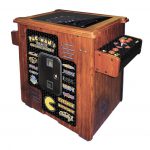 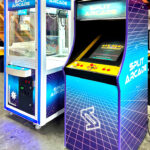 Pac Man’s Arcade Party Game video game for rent is a remake of the classic Pac Man game with included most iconic games of the 80s’.

The game was released in 2010 in celebration of Pac-Man’s 30th anniversary. The game is featuring thirteen of Namco’s most popular arcade video games in a single unit and taking players back to the heyday of the golden age of arcade video games.

You and your friends and family can rent the game and will experience the look and feel of the game as never before. The amassing sound of the game you can only get with this video game machine. Multi-Game Video Arcade Machine, features some favorite arcade video game titles of the past:  Pac/Man, Dig Dug, Galaxian, Galaga, Pac/Mania, Mappy, Rally/X, Rolling/Thunder, Galaga/88, Dragon/Spirit, Xevious and Bosconian. The original graphics on the games look better than the original game. The CRT monitor is replaced with a 26″ LCD monitor.