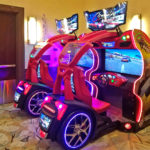 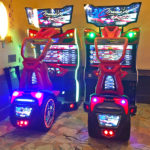 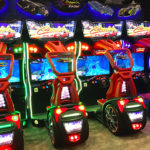 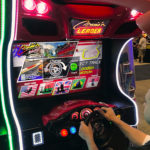 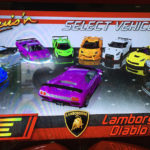 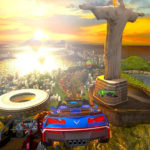 Redesigned the game and took Cruis’n Blast racing video arcade game into the new millennium. The players zoom 200 mph through the bustle of London. Blast through the exotic wonders of Madagascar. Celebrate Carnival in Rio. Amaze to the hi-tech splendor of Singapore and drive an earth-shaking thriller through Death Valley.

Every track in the rented cruising game is packed with speed thrills, exploding scenery, and extreme special FX. In tune with the times, players race in an immersive cruising cockpit simulator. The scenery is loaded with HD supercomputer graphics and immersive effects. The Thrill-D Blaster sound system of cruising game recreates the sound of an actual race. It is backed by a pumping soundtrack that is a staple of the Cruising Blast racing video arcade game rental experience.

Make your special event a blast, rent one or multiple units. Up to 8 cruising games can be linked to incredible competitive play. Cruis’n Blast racing video arcade game rental is the perfect addition to your office break room or game room on a long term rental or lease.