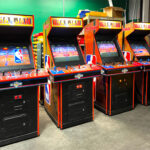 The NBA Jam Basketball Arcade Game for rent was developed and published by Midway games in 1993.

NBA Jam Basketball Arcade game is an exaggerated type of sports basketball video arcade game. This means that jumps are higher than the players, and slam-dunks defy all human capabilities.

Above all, there are no fouls, free throws, or violations except for free throwing. The game is licensed by many of the NBA teams. Such as the Atlantic Hawks, Chicago Bulls, the Pistons, and finally, the Pacers, all from the Eastern Conference. Likewise, from the western conference, there are the Nuggets, Suns, and also the Blazers.