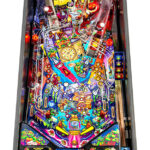 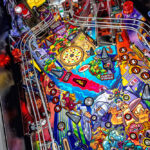 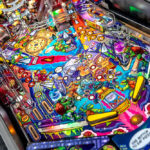 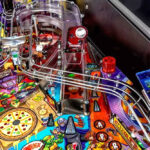 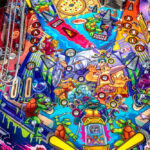 Teenage Mutant Ninja Turtles Pinball Machine – do you want to hang out with four heroes in a half-shell who have sharped ninja skills and a penchant for pizza?

Teenage Mutant Ninja Turtles, also known as TMNT, is a series that has been inspiring kids and adults alike since it debuted as a comic book in 1984. They are airing as a cartoon series from the end of the 1980s through the ’90s. The franchise has appeared in movie theaters, other TV shows, and comic books numerous times over the years, instantly recognized anywhere in the world.

Teenage Mutant Ninja Turtles Pinball Machine for rent from Stern Pinball uses the famous 1980s cartoon as the basis for the pinball theme. At the game’s start, players can choose from their preferred Ninja Turtle: Leonardo, Donatello, Raphael, or Michelangelo. Each turtle has unique features and powers, meaning that the game changes up every time you play it!

Teenage Mutant Ninja Turtles are trained in the art of ninjutsu by their wise rat sensei, Master Splinter. Is New York City ready for these radical reptile brothers? With a sick sewer lair and tough friends like April O’Neil and Casey Jones, the Turtles are about to face evils more dangerous and pizza more delicious than anything they could have ever imagined. In this pinball, adventure players will go to battle as the Turtles fight villains like Shredder, the Krang, and loads of super-powerful mutants, to become the heroes they were destined to be and have loads of fun along the way!