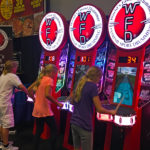 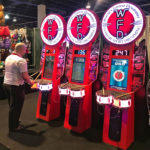 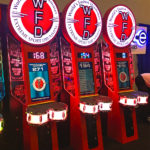 Are you the world’s fastest drummer? Video Amusement is introducing The World’s Fastest Drummer Arcade Game for rent made by Unit-e Technologies.

World’s Fastest Drummer Arcade Game rental features an attractive cabinet with adjustable changeable LED lights. The height of the drums is fully adjustable, making the game user friendly to accommodate adults and small children alike. The rented game can also be used as a promotional tool during trade shows and conventions by dispensing tickets for prizes, redemption, or drawings.

World’ Fastest Drummer Arcade Game can be also be connected online and thus joining the world wide drumming competition. Game scores from all online machines are collected and posted by the region and date.

Video Amusement graphics team can brand World’ Fastest Drummer Arcade Game with LED lights of any colors, your company logo, or custom graphics to make your company stand out at any event or trade show. We can offer multiple games to be set up for tournaments or competition play. World’ Fastest Drummer Arcade Game for rent is an exciting and competitive game for graduations, Bar/Bat Mitzvah, corporate break room/game rooms, trade shows, and conventions, just to name a few.