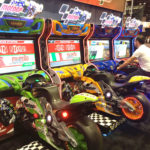 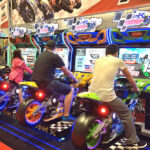 Climb aboard the rented authentic motorcycle racing simulator arcade game. Start racing against the world’s most famous riders like Valentino Rossi, Marc Marquez and Jorge Lorenzo on ten most famous MotoGP tracks from around the world. The games for rent are available in 4 different color schemes (red, yellow, blue, and green) for added location excitement.

The rented game displays the video motorcycle racing gameplay on a stunning 42” HD LCD Display. The games can be rented from Video Amusement as a single individual game. Or for added excitement and competitive play, we recommend pairing the games and taking a race with your friend of a co-worker. The rented games are equipped with a front-facing camera that puts players and their friends and competitors into the game. Up to 8 riders can compete on rented games together against each other. They play either locally or online in multiplayer mode.

Rented motorcycle racing simulator arcade games come with very accurate recreations of famous MotoGP circuits from around the world. The game offers three difficulty levels – Novice, Normal, and Pro. Join one of the 13 MotoGP motorcycle racing teams as a newcomer and race against famous riders! Included with each rental is a front-mounted fan for realistic wind simulations with the ability to race head-to-head between all games. Racing simulator arcade games are a perfect addition for any party, event or corporate break or game room for long-term rental.

With the growing demand for branding and customization, our award-wining creative team will customize and brand the rented MotoGP motorcycle racing arcade games. Most often, with your company logo or custom graphics to make your company stand out at any party event or trade show.