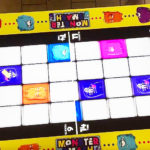 Monster Smash Arcade Game is truly a rare find. The minute we saw the gameplay, we fell in love with this colorful and sleek game. The game is a high-energy, fast-paced game where hand and eye coordination is essential. The game comes in a beautiful bright cabinet with a great sound system. Also, 42-inch flat-screen LCD and LED lighting can be customized to your color theme.

The object of the rented Monster Smash Arcade Game is to smash the colorful blocks with monsters coming down the screen. Players use four buttons on each side of the game cabinet at the end of the moving line, where the colorful blocks with the monsters are terminating. The faster you smash, the faster the blocks are moving toward you. Hand and eye coordination and concentration are critical since the average game lasts about 60 seconds. Finally, the game time skill levels are adjustable. A single player can play this reflex game against the computer. Also, in a competition, head to head mode against your opponent.

The game records the score during the play. The final score with your ranking and your speed stats is displayed on the screen. The game can also be set up to view the high score of the day. The game will encourage a friendly challenge among friends and co-workers.

Monster Smash, Arcade Game rental, is a perfect addition to any party, event, graduation, bar/bat mitzvah, convection, or trade show. Monster Smash Arcade Game is an excellent game for a corporate break room or office on a long-term rental and lease. Puzzle and reflex games are proven to be the best for employee relaxation and stress relief. With our most extensive selection of arcade games and pinball machines, your break room will always be a new and exciting place to visit.