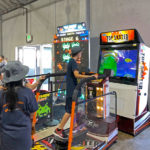 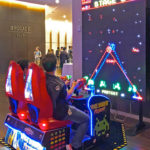 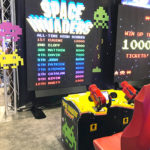 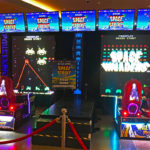 Remember this old classic game? Space Invaders is one of the earliest shooting games most addicting games ever built. The Giant Space Invaders Frenzy Arcade Game for rent is back and bigger than ever! The game is the remake by Raw Thrills of the iconic classic game. This time with simultaneous two-player action played on a giant monitor 8×6 feet large with oversized “laser” guns.

The idea of the Giant Space Invaders Frenzy Arcade Game is straightforward. You are a space ship who must destroy the invading enemy space ships as they descend upon your little world. Use the buttons to fire the gun at the enemy and blow each ship to pieces. Be careful, these ships fire back and as you deplete the enemy space ships. The Space Invaders get faster and faster until the last remaining ship appears to move at near warp speed. To ensure you stay alive as long as possible, hide behind the walls and develop a run-and-gun mentality. Try to blast out whole rows of Space Invaders at once. It makes it easier to shoot into a crowd rather than pinpoint each ship.

Game rental combines several new technologies into the game to create a unique gaming experience. The monitor is 8×6 feet large LED billboard that provides high visual contrast that cannot be replicated on any large TV monitor. The game also uses the new gun technology and new sound system with a subwoofer inside the seat that gives explosions an extra “punch.” The game is suitable for any age group.

With the growing demand for branding and customization, our award-winning creative team can customize and brand the rented equipment. Most commonly, with your company logo or custom graphics to make your company stand out at any party event, trade show, or the company break room. The game also has a built-in programable promotional advertising display screens. Up to 3 of your video ads can be programmed into the game to be shown during the Attract Mode. (224×288.png)