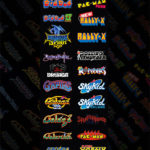 The Game includes 31 classic original video games. These games were initially released in the early ’80s during the “glory days” of the arcades.

This is one of the best and most popular collections of 31 original classic arcade games. Of course, you will find ever-popular titles like PAC-MAN and GALAGA and several popular variations of these well-liked titles. Included are also my personal favorite Dig Dug and Xevious games released initially by the legendary arcade maker ATARI.

Did you see these games?
Ripley’s Believe it or Not! Pinball Machine
More info
Grand Classic Photo Booth
More info