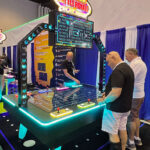 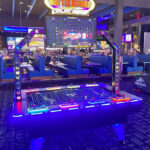 Pac-Man Battle Royale Chompionship takes the basic formula of the original 4-player game and expands it to 8-player competitive Pac-Man game. The original Pac-Man game concept had been given a wild and carnivorous game twist! Eliminate your opponents by eating them, and the last player standing wins the round! Pac-Man Battle Royale CHOMPionship is still a Pac-Eat-Pac game, but now each player has a score and a set of lives, playing to win with the most points. The DX version also allows up to eight players to enjoy the fun on the same cabinet! The playfield includes numerous and hilarious power-ups that will appear at random.

During the game, when players eat a power pellet, they power-up by doubling in size and increasing in speed. Once powered up, they are now able to eat non powered blue players and ghosts. Players of the same size simply bounce off each other. Players can also be eliminated by running into ghosts if there aren’t any powered up players. Eating a piece of fruit or all of the pellets resets the maze with a fresh new set of power pellets. At the end of the game, statistics are displayed for each player such as “Won Most Rounds” and “Ate Most Pac-Man” – This awesome new game is simple, competitive, and highly addictive and the part; 8 players can compete with the opponents.

All new Pac-Man Battle Royale Chompionship DX 8-player game for rent is displayed on a huge 75” 1080p HD screen with two 42” 1080p HD Large and attractive double-sided TV displays showing the action for spectators to see.  Pac-Man Battle Royale Chompionship DX cabinet is very colorful and attractive featuring RGB LED T-molding on the edges of the cabinet and under the joysticks with animated Pac-Men on the marquee bars. Rented 8-player table is about the same size as an air hockey or pool table. 7 foot deep/wide elevator is required for delivery to upper floors.