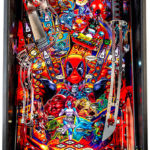 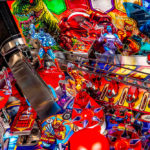 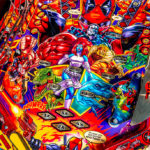 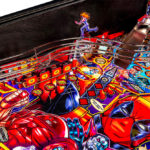 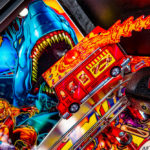 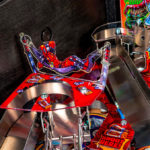 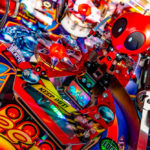 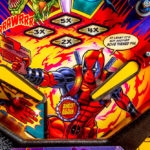 Deadpool Pinball Machine from Stern Pinball for rent is another game based on the Marvel comic book characters.

The game is featuring everyone’s favorite Merc. Notoriously talkative and outrageously funny with his offbeat humor featured throughout the game. Deadpool character is portrayed in the game by the voice of actor Nolan North.

In the rented pinball game from Video Amusement, the players will engage in the Deadpool universe. Will be teaming up other well-known Marvel characters: Dazzler, Wolverine, Domino, and Colossus. Most importantly, they all together engage in the battle against infamous villains: Sabertooth, Mystique, Sauron, Juggernaut, and Mr. Sinister. During players will tag along with Deadpool on the “time machine” quest to battle against the T-Rex and the Megalodon.

According to the chief creative officer and lead designer of the Deadpool Pinball Machine available for rent: “ Deadpool Pinball has been great because it has given us a lot of room what we can do it terms of creativity. Plenty of cool things and action during the play and clear, hi-res screen graphics. Deadpool comes out off the screen to the player in Deadpool fashion, taunting and insulting them.” Each pinball machine comes with two stainless steel and wire form ramps with a Katana Sword ramp return. The pinball will entertain with a fantastic array of ninjas, vampires, and chimichangas, making it suitable for all skill levels. The new Stern Spike 2 system makes the game extremely reliable. The cabinet features Hi-res monitor with HI-FI audio from two speakers on the backboard.