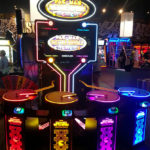 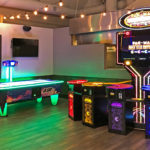 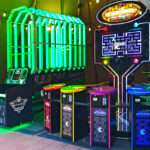 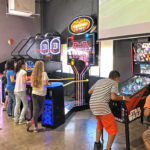 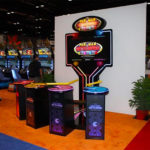 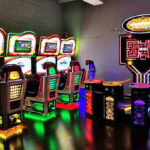 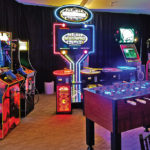 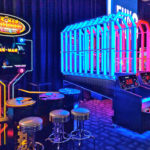 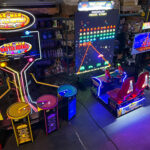 The mega-hit of the ’80s just got super-sized! Pac Man Battle Royale DX Arcade Game for rent – 4 player game with 50 inch LCD screen has never been bigger. Namco Bandai Games released the game as part of the Pac-Man 30th anniversary.

Once you are powered up, you can eat everything in sight, including the blue ghosts. Because the players eat a power pellet, they power-up by doubling in size and increasing in speed. When the players of the same magnitude hit each other, they just simply bounce off each other. Players can also be eliminated by running into ghosts if not powered up. Eating a piece of fruit or all of the pellets resets the maze with a fresh new set of power pellets. At the end of the round, the rented Pac Man Battle Royale DX Arcade Game statistics are posted for each player. These stats include who won the most rounds and who ate the most power pellets.

The gameplay is simple, competitive, and highly addictive. The DX (Deluxe) cabinet comes with a 50 inch LCD monitor and glowing LED lights that make this the perfect centerpiece for any event and party or even your corporate game room on a long term lease or rental.

Game is a super fast-paced fun arcade game. Rented cabinet is a big game and comes disassembled in 5 transport cases. 10-foot ceiling is required for a proper assembly of the game with the oversized sign. We have 5 Pac Man Battle Royale DX Arcade Games available for your next 80s’ themed event or party.