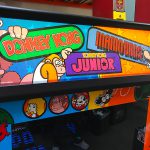 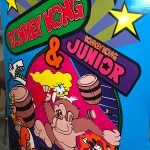 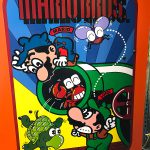 Donkey Kong Combo Arcade Game for rent is a classic arcade rental and an official remake of the famous 80’s classic arcade games Donkey Kong, Donkey Kong Jr., and Mario Brothers. At the beginning of the game, the player can choose to play any of the three games. The games are original 80’s games; the cabinet is all new and updated with new joysticks, computer, and sound.

The Donkey Kong game was made by Nintendo and released in 1981. The game became one of the most famous arcade games of all time. The main character in the game is Jump man that later became the most recognizable iconic character, Mario. The Jump man is traversing stages in sequence, avoiding and jumping over obstacles scattered in the path by a huge ape; Donkey Kong, that also became the most recognizable Nintendo’s video game character. The mission of the Jump man is to save a young woman in agony before time runs out.

Donkey Kong Combo Arcade Game classic arcade, also called Donkey Kong-DK Jr.-Mario Bros., is an excellent choice for rent since one cabinet offers three games to choose from. The game is suitable for any age and just about any event such as a charity fundraiser, trade show promotion, birthday parties, corporate events, weddings, just to name a few.