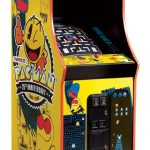 Pac-Man Anniversary Edition with three of the longest running hits in the history of video games in one cabinet: Pac Man, Ms Pac Man and Galaga.

Originally developed by Namco and licensed for distribution in the United States by Midway in 1980, Pac-Man became one of video gaming’s biggest titles and after more than 30 years.

The release of the game proves that Pac-Man is still as popular today as it was when it was released. Outdated features of the recognizable bright blue game cabinet have been improved, but without any compromise to its retro style.

Gameplay is identical to the original versions, but a number of additional options have been added, including features such as “regular” or “speedy” Pac-Man and Ms. Pac-Man, and “original” or “rapid fire” Galaga.

Classic arcade game for a long term rent or lease are a perfect addition for any corporate break or game room. Video Amusement has the largest selection of classic arcade games in California. Featuring the classic 80s’ games and the current new releases.