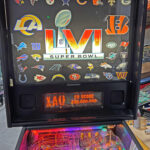 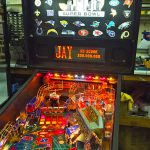 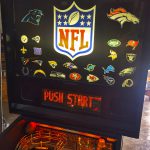 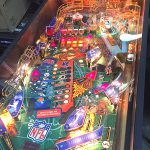 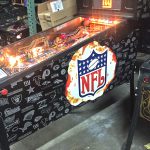 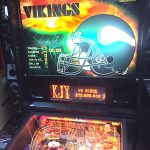 NFL Pinball Machine for rent is a very rare and limited edition pinball produced by Stern Pinball in the spring of 2001- All games were in a particular order. Only 19 different versions of NFL Football were made, representing most of the significant NFL franchises. Only a minimal number (25 to 100) was made for each team. They were making this pinball machine an extremely rare football collector’s item!

NFL Pinball Machine is packed with action. It starts with everything, like the sounds of cheering fans in the stadium. With an announcer that comments on the play and to some excitement and packed music plus fast-paced pinball action!

NFL Pinball Machine gameplay and rule sets are the same for all NFL teams; only the artwork and graphics were changed on the backglass for the different team names and NFL Official Logos.

Any NFL Pinball Machine can be converted from one team to any other team. Please specify the team you want on your order if you want another team logo.

Classic pinball games for long-term rent or lease are a perfect addition to any corporate break or game room. Video Amusement has the largest selection of pinball tables in California. They feature the classic 80s games and the current new releases.