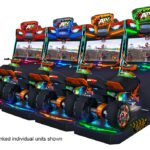 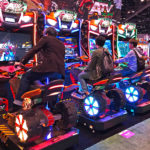 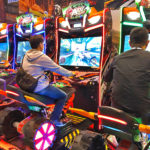 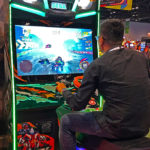 ATV Slam Dirt Racing Simulator Arcade Game for rent is the greatest All-Terrain Vehicles (ATV) racing game ever produced. Features like these have never been seen before in an arcade game simulator. ATV Slam Dirt Racing Simulator Arcade Game from SEGA Amusement features a life-size, realistic ATV bike with large LED-lit wheels. It also has a bright chrome engine and incredible lighting effects. The game features a custom-designed motion platform for the players to experience the real feel of being on a real dirt track.

In the rented ATV Slam Dirt Racing Simulator Arcade Game, the players’ race to the finish line pulling stunts and avoiding multiple road obstacles. To extend the play and gain an upgrade point for the next race, the player has to win the “important” hurdles as well.

The ATV Slam Dirt Racing Simulator Arcade Game features a unique and innovative AI system specifically designed to adjust the difficulty of gameplay. This innovative feature helps the casual and hardcore players gain rewards in every race alike. The gameplay is intensified by the colorful environment, real wind effects, and real-life game graphics. All these superior features are delivered by ‘Unreal Engine 4′, and a beating 2.1 stereo channel soundtrack to get the players’ adrenaline pumping.

ATV Slam Dirt Racing Simulator Arcade Game for rent is built with realistic features mirroring the actual life-like ATV bikes. It has control speed, direction, and brakes using the best quality handles and controllers. The superior graphics are delivered on a 47inch HD monitor. The best part of the game is a custom-designed motion platform on each bike to create the realistic feel of the actual dirt road. The cabinet is equipped with an “Air Cannon,” a strong fan built into the front cabinet to blow air into the players’ face to stimulate additional life-like effects. Up to four (4) units can be linked for the competitive play. ATV Slam Dirt Racing Simulator Arcade Game cabinets come in four (4) colors: red, blue, orange, and green.

Are you renting the games for a special event or a trade show? Our professional team will further enhance the games matching your corporate identity with custom branding and wraps. Please contact Video Amusement professional staff for more information.