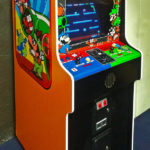 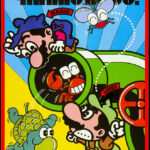 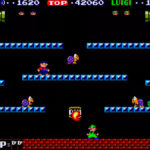 Mario Bros Classic Arcade Game for rent is another classic 80s arcade video game available for rent. The original game was first released in 1983 by the legendary game manufacturer from Japan – Nintendo.

Mario Bros Classic Arcade Game was the first in series of the many Mario characters that followed in future Mario titled games.

Mario Bros Classic Arcade Game rental is a 2-player game, where 1 or 2 players can play together to defeat all of the enemies in each phase of the game.

The game features two Italian plumbers Mario and Luigi. Their goal is to investigate the sewers in New York City after strange creatures have been spotted in the sewers and scarring the citizens of the city. During the investigation, they spot multiple enemies; Shellcreepers, Sidesteppers, Fighter Fly, and Slipice. The players’ goal is to gain points by defeating various enemies and additionally participate in bonus rounds to earn even more points. The game gets harder and harder as the player makes it to the next stage of the game.