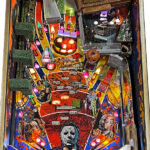 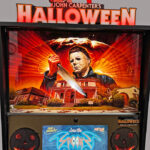 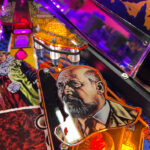 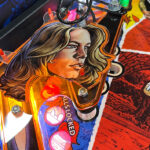 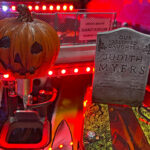 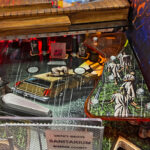 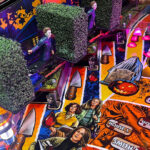 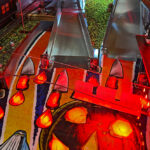 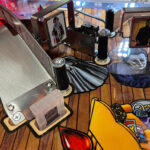 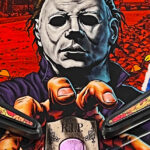 Halloween Pinball Machine from Spooky Pinball LLC is the latest addition to the growing list of games for rent. The pinball game is themed on the classic 1978 John Carpenter movie. Horror movie fans and Halloween will fall in love with this beautiful masterpiece of functioning art.

The highlight of the Halloween Pinball Machine for rent is the realistic artwork depicting the characters from the original movie cast. Jamie Lee Curtis’ Laurie Strode and Donald Pleasance’s Sam Loomis have remarkable likenesses made in their image. On the back of the game is a custom-lit interactive topper of the famous artwork from the movie poster featuring a pumpkin and kitchen knife. The knife is a reference to the killer’s most frequent weapon. Creators of the game used the same knife as the custom handle for the ball shooter.

Other notable features of the Halloween Pinball Machine include a flashing pumpkin sculpt and a triple-lighted pumpkin drop bank. As well as Judith Myer’s tombstone ball lock and triple upper playfields to help get the player up to the balcony for the big finale of the game. This feature is pulled straight from the edge-of-your-seat climax, the showdown between the two main characters.