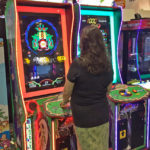 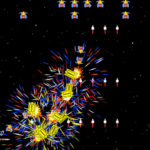 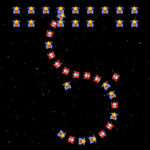 For all the stalwarts of Giant Galaga Assault Arcade Game & for those who are novel to the world of Galaga gaming. Bandai Namco and Raw Thrills have joined hands to render you, the all-new Giant Galaga Assault Arcade Game game for rent. This game proffers new exciting & engrossing features and stages that are going to make your adrenaline gush high.

The conjoint efforts of Bandai Namco and Raw Thrills have redefined the shooting experience of the Giant Galaga Assault Arcade Game. The rented arcade cabinet now comes with 42” massive LCD screen with 1080 HD view. They are thus giving a realistic touch to the players. The game comes with additional features like rotating LED lights, and the RCB lighted T-molding.  Installed on the exterior perimeter of the cabinet highly boosts the look. Furthermore, the sound system installed in the cabinet adds to the excitement level of the players.

The gameplay is divided into two stages:

2.    Mothership stage, where you reach after defeating 100 enemy ships and get a chance to destroy the mothership to win the jackpot.

The developers of the game have also introduced points to ticket conversion. By buying of ships, amusement mode, and QR coding. Now it’s time to tie your seat belts and load all your equipments. Enjoy the virtual world of shooting with Galaga Assault Arcade Game for rent.