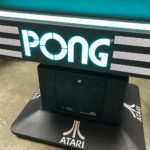 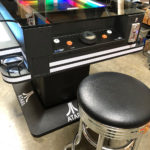 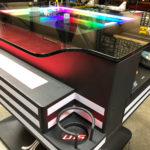 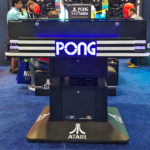 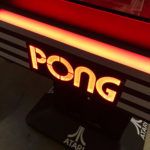 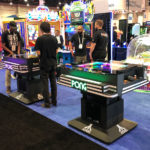 Atari LED PONG Cocktail Table for rent. In 1972, Atari Corporation released a brand new video game PONG. It changed the world of gaming, amusement, and entertainment forever. Today, almost half a century later, UNIS Games company is bringing this classic iconic game back in a way we have never seen before.

UNIS Games company took the original idea of the game. It recreated the game using traditional technology, also using electromechanical technology, electric motors, and magnets to recreate this original classic game. The game is using real 3D blocks in the playfield sliding across the surface. They are powered by mechanical chassis and magnets just below the playfield. Each player controls the white paddle using an oversized spinner control and launches the 3D “ball” with the press of the button. All this action recreates the look and feel of the original game.

Atari LED PONG Cocktail Table for rent is a commercial version of the original PONG table model. Rented game has been designed with the larger cabinet and enhanced with attractive with multi-colored glowing changeable LED lights. Atari LED PONG Cocktail Table rental is a beautiful table with a large glass top and adjustable height. The game can be played standing up, or the table can be lowered, and the players can play sitting on the supplied bar stools. The rented game is set on FREE play and can be played as a single-player against the computer or two-player competing against each other.

Atari LED PONG Game is the hit of 2019. Video Amusement is keeping up with the growing demand for the game. We have eight units in stock, and with the popularity of the game, we will be adding more. Please call us for the availability of the game for rent for your party and event. The game is an attractive addition or a long-term rental or lease for your corporate break room.

Atari LED PONG Cocktail Table is a large and heavy game. The cabinet is 40” wide and 44” long and weighs almost 300lbs. We require a minimum door opening 41”. If you do not have such a large entryway, we can still deliver the smaller version of the game; Atari PONG Classic Arcade Game table, that is only 26” wide.