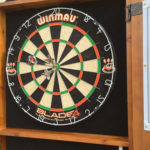 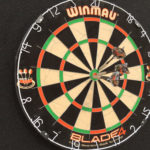 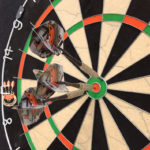 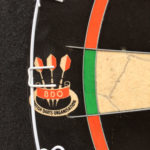 We offer Original English Darts Game for rent official tournament-size dartboard. This is a freestanding dartboard mounted on an oversized dart-stop backboard on a portable commercial stand. The darts used with this board are “steel” tip darts.

Did you know that Darts were historically used in warfare in early human history? In the battles, darts were used in varying sizes, similar to miniature spears. The practice of this skill developed into a game of skill. Before the First World War, pubs in the United Kingdom had dartboards made from solid blocks of wood. They had to be soaked overnight to heal the holes made by the darts, and it was a messy business for the pubs, although the game of darts was a popular game.