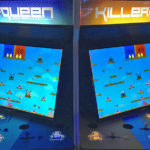 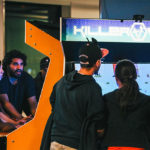 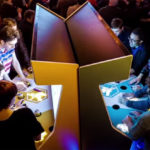 Killer Queen Arcade Game for rent – 10-player real-time strategy platform video arcade game designed by Josh DeBonis and Nik Mikros. The game incorporates elements of the classic 80’s games Joust and Starcraft with the addition of a giant snail. The game is visually charming, incredibly addictive, and will grab your attention as soon as you start playing.

The play is simple—two teams face-off against each other, led by a powerful Queen trying to achieve one of two objectives. The first, bring the giant snail god home and fill their hive with nectar. The second, assassinate the enemy Queen.

There are several strategies you can use in rented Killer Queen Arcade Game. The most straightforward strategy involves collecting a slew of berries. Bringing them back to your base and riding a slowly moving snail towards your goal. The philosophy behind these strategies is to creep your way to winning status subtly. Hoping your opponents are lost in the commotion.

If you want to try a bolder approach, you can win by slaying your enemy’s queen three times. But that’s easier said than done. Each team has four grunts and one queen. The queen has wings allowing her to flutter about like the avatars in Joust. The grunts, however, merely run around on the ground and must level up before they have any offensive capabilities. To level up, the grunts must bring berries to the gates tagged by your team’s queen.

We haven’t seen such excitement over a video game in 25 years. At least, not since Street Fighter II’s release in the early ’90s. This is the game “you can play with your friends just like the good old days.” Rented Killer Queen  Arcade Game comes in two oversized cabinets, each with 52” LCD monitor and five controllers for five players.