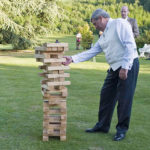 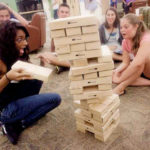 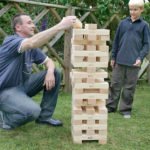 Giant Jenga – Tumble Tower Game for rent is a game of skill. It was created by British board game designer Leslie Scott in the early 1970s using children’s wooden blocks. Jenga is derived from the Swahili word kujenga, which means “to build.”

The game set consists of 56 soft pine or cedarwood blocks. These 56 blocks create a 19-level tower standing almost 3 feet tall at the start of the game. Players take turns to remove blocks from the tower and placing them on the top. The goal is to build the tower as high as possible using only one hand without making the tower tumble! Is it possible to construct this Giant Jenga – Tumble Tower Game to almost 5 feet tall?

For complete rules and more info, please click on this link.

Video Amusement rents this game only in a package of 3 or more games.