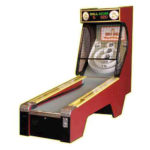 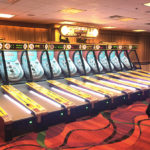 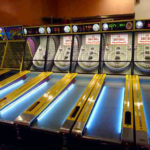 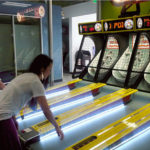 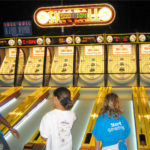 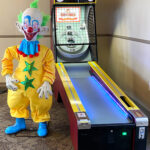 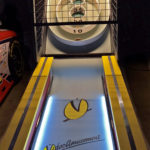 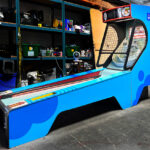 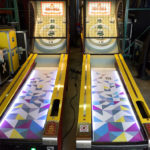 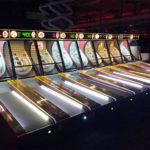 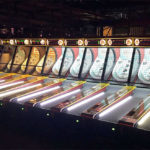 The game was invented in 1909 by J.D. Estes in the city of Philadelphia. When Skeeball/ Skee Ball alleys were first sold in 1914 to the outdoor amusement park industry, the game had a 36-foot lane. This was much too big for most arcades. It was made so that only people who were quite strong could play it well. As a result, it was later changed to 14 feet. That eventually changed again to the modern length of 10 feet. Soon after these changes, the Skeeball/ Skee Ball alley became very common in arcades around the United States.

The SKEEBALL/ SKEE BALL Classic Carnival Arcade Game for rent can be programmed to play 3 to 9 balls. Most commonly, the game is played with 9 balls. The game is a fast-playing game similar to bowling, but it is played on a shorter inclined lane. The object of the game is to aim the balls into holes placed in a shape of a target on the back of the playfield. The harder to reach holes will earn you more points. SKEEBALL/ SKEE BALL Classic Carnival Arcade Game rental is a must for any carnival or boardwalk themed event. You can rent only one game or multiple games that can be linked to competitive play. Additionally, the games at the rental event can be set up to give optional tickets for prizes. Please call us for details about this option.

More information about the game delivery:

Video Amusement has the most extensive inventory of SKEEBALL/ SKEE BALL Classic Carnival Arcade Game in stock on the West Coast and ready for your guests to enjoy. Our graphic team can customize Skeeball/ Skee Ball alley games with your company logo or custom graphics to make your company stand out at any event or trade show. To further enhance the attractiveness of the rented SKEEBALL/ SKEE BALL Classic Carnival Arcade Game, we offer optional colorful  Marquee that can be installed on a single or multi-game setup. Let’s roll the ball with the skeeball/ skee ball!