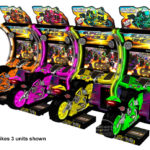 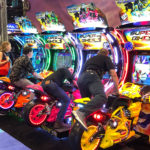 The new Super Bikes 3 games were designed for the commercial arcades with rugged quality. The cabinet is enhanced with the new colorful LED lights. Chrome accents makes the game stand out and brings the high-octane experience for the players.

The Super Bikes 3 Motorcycle Arcade Racing game rentals come standard with the following features: the best and the most beautiful detailed graphics found in any of the previous versions. 47” HD 1080p LCD monitor with and 60 frames per second. Cutting edge Wi-Fi sound with cabinet LED lightings synchronized to the in-game action. The bike was redesigned with new swivel controller for the ultimate players’ experience. The new game features 8 brand new tracks and 8 new licensed “tricked-out” bikes. Up to 8 units can be linked for the ultimate competitive bike battle. The scores can be shared online via Raw Thrills Highs Score Hall of Fame. The Super Bike 3 Motorcycle Arcade Racing game cabinets come in four (red, blue, pink and yellow) colors.